A quick and easy recipe to make vegan scallops at home. Serve these mushroom scallops as an appetizer, with pasta or salads!

Today I’m sharing with you my recent cooking experiment with the best vegan alternative to scallops. King oyster mushrooms are the star of this look-alike vegan scallop recipe.

Tossed together with a few umami-rich ingredients and served with a simple pasta, they truly make a showstopping meal.

The beauty of this veganized version of one of the most popular restaurant seafood items is that they’re so versatile.

You can serve them as an appetizer, add them to salads or to lots of different vegan pasta dishes.

They can easily elevate a simple pasta dish. I pair them with linguine cooked al dente, and smothered in a creamy lemon vegan silky sauce. 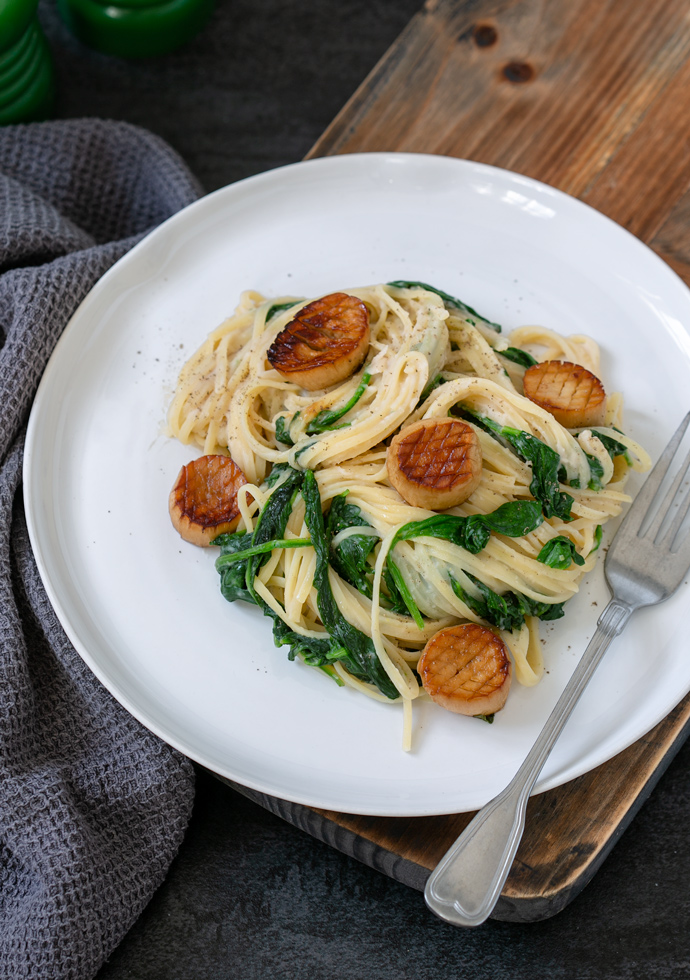 In this case, all you have to do is make a batch of pea pesto, place the scallops on top, and arrange a bunch of seasonal baby leaves on a serving plate.

You can also add some asparagus, either blanched or grilled to bright up the dish with extra green and flavors. 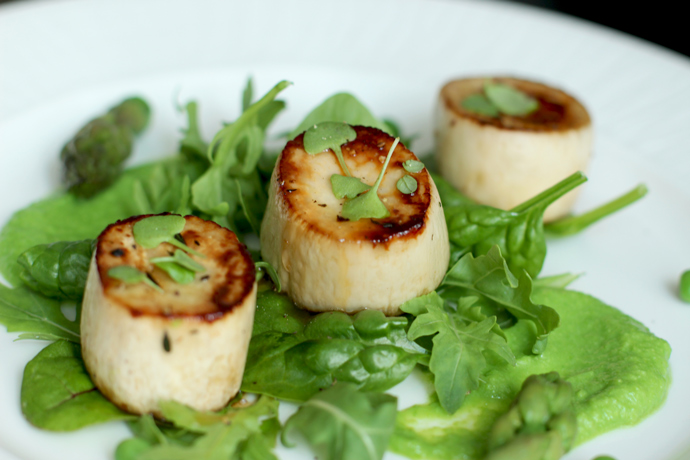 What are Vegan Scallops Made Of?

Known also as fake scallops, king oyster mushrooms are the star of this vegan scallop recipe.

They’re thickly sliced in a way that closely resembles to real scallops, both visually and in terms of texture.

All right, you can fool the eyes but what about the flavour, do they taste like the real deal?

Most of the people would say yes, but to be absolutely honest, they taste more like abalone, a rare and luxurious mollusc just as delicious as scallops.

Raw King oyster mushrooms have very little flavour, but they 're loaded with umami when marinated and cooked, bringing out a unique and luxurious flavour.

To get the scallops look-a-like appearance, simply slice the mushroom stem into thick rounds.

Using a knife, you can make a cross-hatch pattern over the top of one side. This will allow the mushroom to absorb more flavor during the marinade and cooking time.

The secret to making the best vegan scallops is the marinade

You might simply soak the mushrooms in warm water with a tablespoon of soy sauce, but if you have a little more time, trust me, soaking them in this marinade will make all the difference.

The marinade is super simple and made of soy sauce, miso, vegan Worcestershire sauce, brown sugar and vegan white wine. You will end up with mushrooms that are juicy and loaded with seafood flavour, just like the real ones!

All you have to do is pop the mushroom in a small saucepan with the marinade ingredients. Let them cook gently over low heat for 10 minutes, then remove the pan from the heat, and allow the mushroom to soak all the amazing flavors for a further 10 minutes. 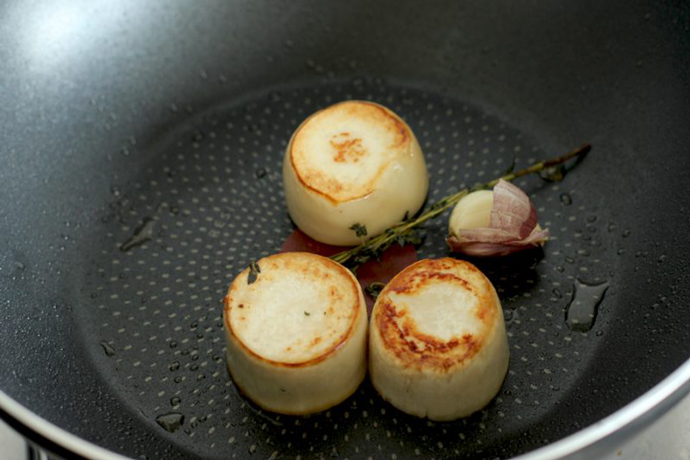 After that, gently pan-fry or grill the mushroom stems with thyme and garlic until nicely crisp and brown, it should take about 3 minutes per side.

It's fascinating to watch them cook and turn into scallops look-alike. Impressive, really.

They are ready in less than 10 minutes, just enough time to cook your pasta.

If you're looking for a showstopping vegan pasta recipe that will leave your guests asking for more, you can't go wrong with this!

DID YOU MAKE THIS RECIPE?

Looking at your pictures always makes me smile *and super hungry*!

You can store cooked vegan scallops in an air-tight container for up to 3 days. Reheat them gently in a pan over low heat until warm to the touch. Nutritional information does not include the marinade ingredients.
Did you try this recipe? Tag @thepetitecook or use the hashtag #thepetitecook - Looking at your pictures makes my day!

Recipe published in June 2015 and updated with an improved recipe, more information and new images.